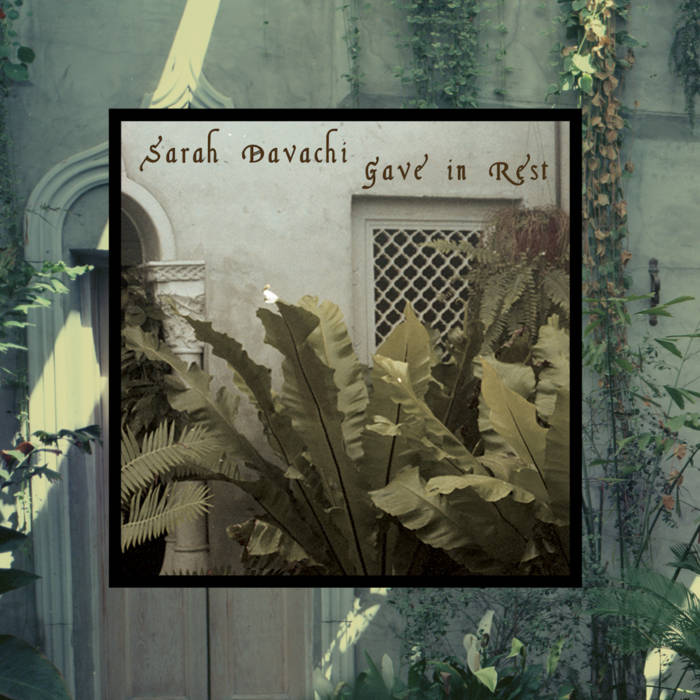 Composed and mixed by Sarah Davachi

Recorded April and July 2017 at Hotel2Tango in Montréal QC, engineered by Howard Bilerman

From Ba Da Bing:
Sarah Davachi has quickly risen in prominence since her first release five years ago, and Gave In Rest represents her highest artistic achievement. By infusing her compositional style within a predilection for medieval and Renaissance music, Davachi unearths a new realm of musical reverence, creating works both contemplative and beatific, eerie yet essentially human. Gave In Rest is a modern reading of early music, reforming sacred and secular sentiments to fit her purview and provide an exciting new way to hear the sounds that exist around us.
Between January and September of 2017, Sarah Davachi lived in flux; storing her belongings in Vancouver, she spent the summer in Europe, occasionally performing in churches and lapidariums and seeking respite from her transitional state while surrounded by such storied history.

“I’ve always been a pretty solitary person, but that summer I discovered quiet moments to be increasingly valuable,” says Davachi. “I became engaged in private practices of rest and rumination, almost to the point of ritual.” Though not religious, she sought ecclesiastic environments, sitting for hours in muted spaces and listened to how church instruments augmented them – their pipe organs, their bells, their choral voices – and resolved to “tap into that way of listening.”

Davachi went deeper into studying early music over that summer, considering how Renaissance musicians experimented with new instruments, forms, and texture. Her reflections led her to the duality of stillness and rest, and upon entering Montréal’s hotel2tango with Howard Bilerman, she adapted her modern style to standard approaches of a recording studio’s function. She composed the majority of the record alone at the piano to find specific harmonic colors and movements, then brought in an ensemble of musicians to interact and extrapolate organically with those tones.

Gave In Rest opens and ends at its most unornamented moments: the first track, “Auster”, being played entirely on a recorder and then, “slowed down and opened up so you can hear the innards of the sound,” and the final track, “Waking”, one long take of Davachi on a Hammond organ. The latter is a solitary departure of concrete simplicity and is allegorical in its inclusion at Gave In Rest’s end, with harmonic structures of a Baroque style materializing and wavering in long, textural passages of consonance and dissonance. The overdubbed, chant-like singing on “Evensong” was treated through an EMT 140 plate reverb, the very same unit Stevie Nicks used for “Rhiannon”.

Completed after this period of suspension in her life, Davachi finished Gave In Rest while establishing herself in Los Angeles. Her new home is a radical departure from her previous Northern surroundings, with its vast reach, otherworldly terrain, and bizarre, isolating nature; “It is easy to remain anonymous in Los Angeles,” says Davachi. Gave In Rest was mixed over a period of two months while she adjusted to this new lifestyle.

Davachi has mined a bottomless landscape where listeners can witness music’s participation in their solitudes. Gave In Rest lends a voice to her personal exploration with a firm, intuitive stance.